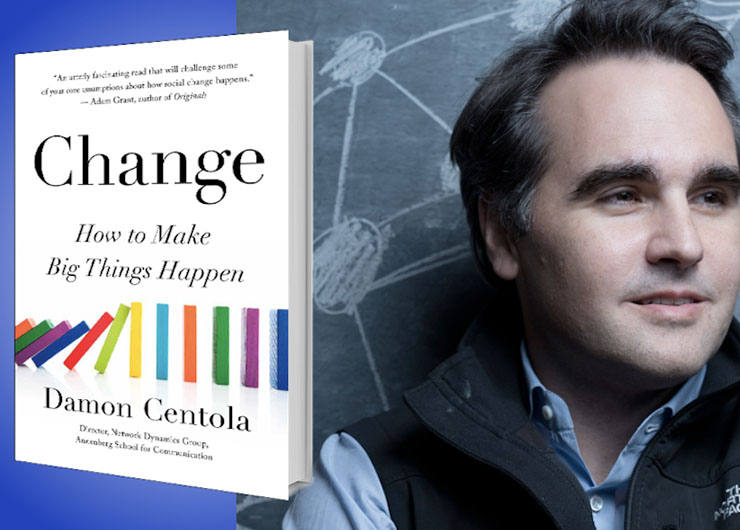 Join us for an evening with author Damon Centola.

Damon Centola studies social networks and behavior change. His work identifies the social causes of disease outbreaks; the origins of political conflict and ideological polarization; and the dynamics of tipping points in social norms.

REGISTER HERE
This event is only open to members in good standing. Please contact [email protected] if you have not renewed your membership.

This event is generously sponsored by the Penn Club of New York.

Damon Centola is a Professor in the Annenberg School for Communication, the Department of Sociology, and the School of Engineering and Applied Sciences at the University of Pennsylvania, where he is Director of the Network Dynamics Group. He is a leading world expert on social networks and behavior change. His work has been published in Science, Nature Human Behavior, Proceedings of the National Academy of Sciences, American Journal of Sociology, Circulation and Journal of Statistical Physics. Damon received the American Sociological Association’s Award for Outstanding Research in Mathematical Sociology in 2006, 2009, and 2011; the Goodman Prize for Outstanding Contribution to Sociological Methodology in 2011; the James Coleman Award for Outstanding Research in Rationality and Society in 2017; and the Harrison White Award for Outstanding Scholarly Book in 2019. He was a developer of the NetLogo agent based modeling environment, and was awarded a U.S. Patent for inventing a method to promote diffusion in online networks. He is a member of the Sci Foo community and Fellow of the Center for Advanced Study in the Behavioral Sciences at Stanford University.

Popular accounts of Damon’s work have appeared in the New York Times, the Washington Post, The Wall Street Journal, Wired, TIME, The Atlantic, Scientific
American and CNN. His speaking and consulting clients include Amazon, Microsoft, Apple, Cigna, the Smithsonian Institution, the American Heart Association, the National
Academies, the U.S. Army and the NBA.

Praise for the author

“An utterly fascinating read that will challenge some of your core assumptions about how social change happens.”— Adam Grant, Wharton Professor and NYT Bestselling
Author of Give and Take, Originals and Option B

“This remarkable book provides a powerful way to think about change…a critically important guide to effecting change in our individual lives, businesses, societies, and
beyond.”— Jonah Berger, Wharton Professor and bestselling author of The Catalyst and Contagious

“This is a timely must-reading for any leader who wants to meet the forces of resistance head-on and steer behavior in positive directions.”-— Rosabeth Moss Kanter,
Harvard Business School