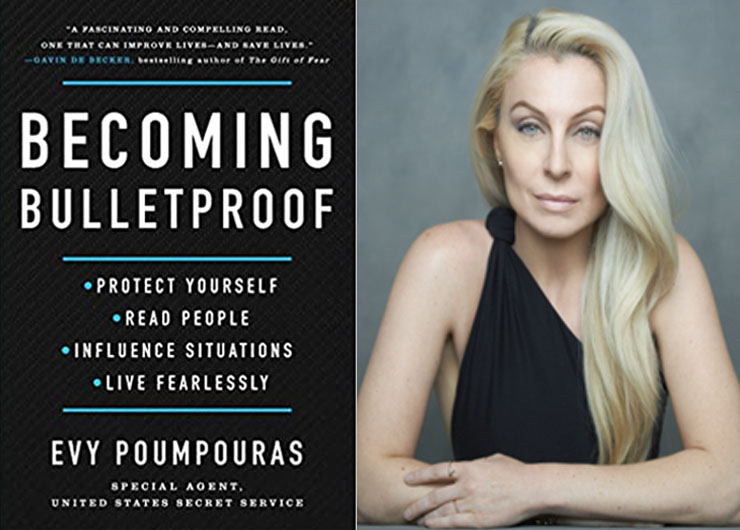 Evy Poumpouras is multi-platform journalist and host who frequently appears on NBC, MSNBC, CNN, and ABC. She covers a wide range of topics, such as national security, law enforcement, personal protection, behavioral analysis, situational awareness, and how to live life fearlessly. Evy can be seen as an Assessor on the Bravo series “Spy Games”. Inspired by a once secret World War II government program called “Station S,” “Spy Games” follows 10 contestants as they battle it out in the ultimate game of espionage.

In addition, Evy’s book, BECOMING BULLETPROOF, was released via Atria on April 21, 2020. In it, she shares lessons learned from protecting presidents, as well insights and skills from the oldest and most elite security force in the world to help you prepare for stressful situations, instantly read people, influence how you are perceived, and live a more fearless life.

As a former Secret Service Special Agent, she was part of the protective details for President Barack Obama and First Lady Michelle Obama, as well as former Presidents George W. Bush, William J. Clinton and George H. Bush. She worked complex criminal investigations and undercover operations, executed search and arrest warrants, and investigated both violent and financial crimes. Additionally, Evy was an interrogator for the agency’s elite polygraph unit and trained by the Department of Defense in the art and science of lie detection, human behavior, and cognitive influence. Outside of her role as a journalist, Evy is a TEDx speaker and international advisor whose expertise is sought worldwide. She has been a keynote speaker for NASDAQ, SOCOM, Yankee Stadium Series, United Technologies, Corcoran Group, Tyco, Skanska, Red Door Spa, amongst many others. She is an Adjunct Professor for The City University of New York where she teaches criminal justice and criminology. Evy was also cast on CBS’s TV series “The Hunted.”

Hosted by the Penn Club.  Open to all Columbia Club members.

Our discussion will be live on Zoom. Register to join the conversation. Once your registration is confirmed, we will send you a link.

Evy holds a Master of Science from Columbia University in Journalism, a Master of Arts in Forensic Psychology from Argosy University, and a Bachelor of Arts in Political Science and International Affairs from Hofstra University. She is also a former New York City Police Academy recruit, and a graduate of the Federal Law Enforcement Training Center, Secret Service Academy, and the Department of Defense Polygraph Institute. Evy is the recipient of the Secret Service Medal of Valor Award for her heroism on September 11th.