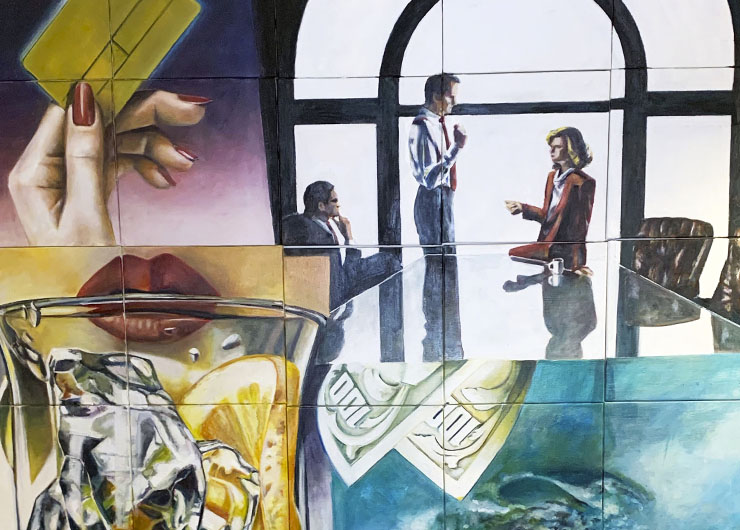 CUCNY Curated – The Odds are Good, but the Goods are Odd by Kristin Simmons ’12CC

Kristin Simmons ’12 CC invites Columbia University Club members to be her guest at the opening of her show, The Odds are Good, but the Goods are Odd.
Location: Phillips
Time: 5-7 PM

Artist Biography
Kristin Simmons wants you to know that everything in this world is a double-entendre. If you can’t see it, look closer.

She uses paint, printmaking, and mixed media to provide a running commentary on herself and her contemporaries. And she doesn’t sugarcoat her observations. (Except, of course, when she’s creating a 33-square-foot print of a Candyland board, or silk-screening a handful of cookies amongst an even bigger handful of Valium.)

Simmons’ work, which focuses on hedonistic pleasures—and in particular, the absolute pleasure of consumption—is as acerbic, provocative, and unapologetically clever as it is empathetic and vulnerable. She thinks that all consumption stems from an effort to distance oneself from pain, or steer oneself closer to pleasure. Simmons was born in the late ’80s and raised in Manhattan, which explains quite a bit.

Her art depicts the fulcrum of innocence and debauchery, of satiation and indulgence. She believes that this point of transition is ubiquitous within all of reality. Her pieces juxtapose colorful, graphic compositions—which often contain childhood artifacts, glitter, and neon—with more sinister, sybaritic messages. Whether she’s exploring pop culture, politics, or capitalism, Simmons doesn’t shy away from the polemical. But her work never moralizes. What the average person might call “bad behavior,” Simmons would call “human nature.”

She’s the recipient of several prestigious awards, including the Orra White Hitchcock award, and the National Endowment of the Arts Award. Simmons received a dual Bachelor of Arts degree in Art History and Visual Arts from Columbia University. She’s had two solo shows to-date and has been featured in numerous group exhibitions, including at the 2016 Whitney Biennial at the Whitney Museum in New York.