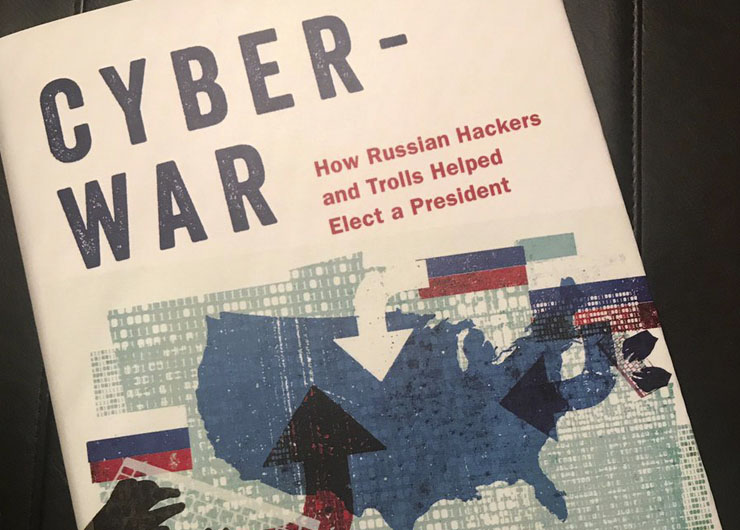 The question of how Donald Trump won the 2016 election looms over his presidency. In particular, were the 78,000 voters who gave him an Electoral College victory affected by the Russian trolls and hackers? In Cyberwar: How Russian Hackers and Trolls Helped elect a President , Kathleen Hall Jamieson marshals the troll posts, unique polling data, analyses of how the press used hacked content, and a synthesis of half a century of media effects literature to argue that, although not certain, it is probable that the Russians helped elect the 45th president of the United States.

A powerful, evidence-based analysis by one of the deans of American politics on how Russian interference likely tilted the 2016 election to Donald Trump.

Dinner with Kathleen Jamieson will follow. A separate registration is required.

She has authored or co-authored 16 books, most recently Cyberwar: How Russian Hackers and Trolls Helped Elect a President (Oxford University Press), which won the 2019 R.R. Hawkins Award from the Association of American Publishers. Including Cyberwar, six of the books that Jamieson has authored or co-authored have received a total of nine political science or communication book awards (Packaging the Presidency, Eloquence in an Electronic Age, Spiral of Cynicism, Presidents Creating the Presidency, and The Obama Victory.) She co-edited The Oxford Handbook of Political Communication and The Oxford Handbook of the Science of Science Communication.

Jamieson has won university-wide teaching awards at each of the three universities at which she has taught and has delivered the American Political Science Association’s Ithiel de Sola Poole Lecture, the National Communication Association’s Arnold Lecture, and the NASEM Division of Behavioral and Social Sciences and Education Henry and Bryna David Lecture. Her paper “Implications of the Demise of ‘Fact’ in Political Discourse” received the American Philosophical Society’s 2016 Henry Allen Moe Prize.

Jamieson’s work has been funded by the FDA and the MacArthur, Ford, Carnegie, Pew, Robert Wood Johnson, Packard, and Annenberg Foundations. She is the co-founder of FactCheck.org and its subsidiary site, SciCheck, and director of The Sunnylands Constitution Project, which has produced more than 30 award-winning films on the Constitution for high school students.

Penn Club affiliation is required to register for this event.

Log in to your Penn Club account to register. Once you have logged on to the Penn Club member area, you will find the Penn Club event calendar under “Social” on the home page navigation. Click on the event to find a more detailed description and complete the registration information. Include any guests who will attend on your registration form.

Not a Penn Club member yet?  Click here to get your membership started today!