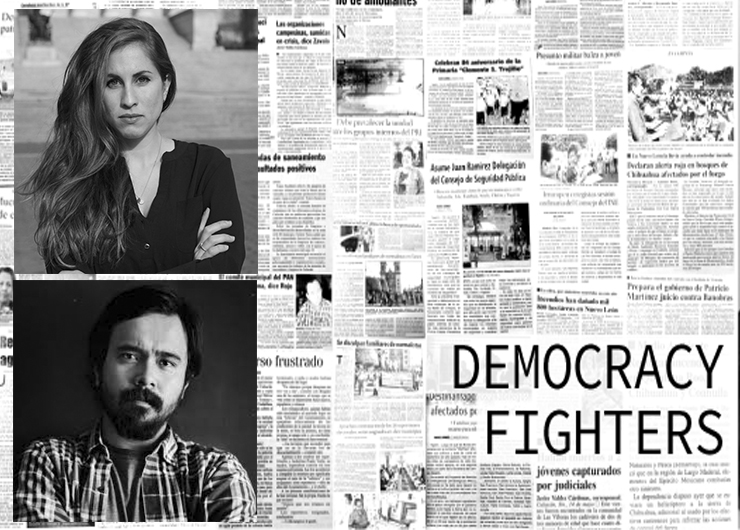 Join us for the presentation of Democracy Fighters, a living archive, and a conversation with Emmanuel Guillén Lozano, Mexican photojournalist

6:30 – 7:00 PM│Presentation of Democracy Fighters, a living archive by Alejandra Ibarra

Alejandra Ibarra Chaoul ’17JRN is the director of Democracy Fighters, a living archive that aggregates and preserves the works of journalists killed in Mexico. She is the author of the book “El Chapo Guzmán. The Trial of the Century.” In 2018, she covered the trial against the infamous kingpin Joaquín Guzmán Loera for the award-winning Sinaloa-based weekly Ríodoce. Her work has been published by Ríodoce, Worcester Magazine, The Haitian Times, Nexos and Horizontal. She’s produced news for Univision and done reporting for The New Yorker. With a focus on data-driven investigative journalism, Ibarra Chaoul is devoted to exposing violations to our social contract.

Emmanuel Guillén Lozano is an independent documentary photographer currently based in New York City. He is a graduate in communication sciences from the Universidad del Valle de México. His photographic work focuses on social issues, human rights and the effects of violence; it has been published by the New York Times, Vice and Deutsche Welle. Organizations like the Open Society Foundation, Reporters Without Borders and the Committee to Protect Journalists have also featured his work. Guillén Lozano currently works as a freelance photo editor and photographer.

Democracy Fighters is a living archive that aggregates the works of journalists killed in Mexico while providing context of the places where they worked. According to the Committee to Protect Journalists, Mexico is currently one of the deadliest countries for reporters in the world. Since 2000, 111 journalists and media workers have been murdered in the country. Almost none of these cases have been solved. In the face of this crisis, Democracy Fighters aims to find and preserve the works of killed journalists before they disappear. In this online public repository, we honor the legacy of those who died speaking truth to power. This project was made possible through a Magic Grant from the Brown Institute for Media Innovation and a gift from Lila Gault and Bill Arp.

This event is co-hosted by the Columbia University Club of New York, the Penn Club, the United Nation Association of New York. Thanks also goes to the Columbia School of Journalism.