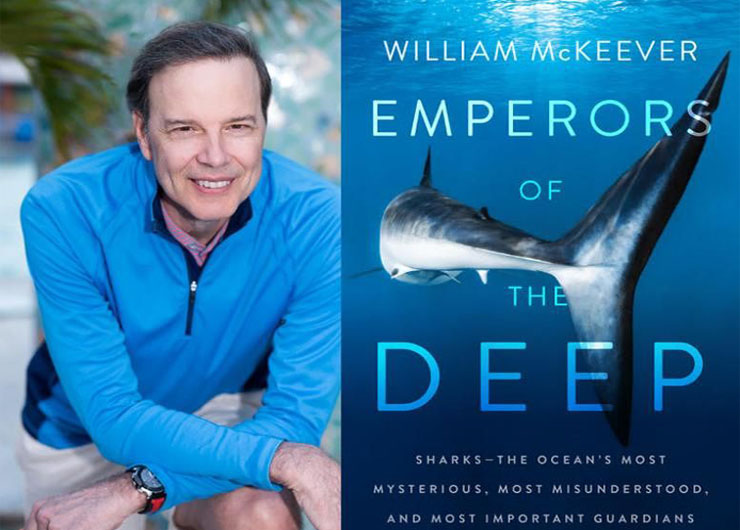 Emperors of the Deep: Sharks

Join us for an underwater adventure with William McKeever, ocean conservationist, writer, producer and director, for a sneak peek at his upcoming film on sharks and a discussion of his 2-year journey around the world to study these most mysterious, most misunderstood and most important guardians of the ocean.

We will travel the globe with William – from Montauk, Long Island, to the Bahamas, Cape Cod to Cape Town, Florida Keys to Australia’s Shark Bay, Korea to Taiwan, to the tropical waters off Hawaii, South Africa and Cambodia, to discover the truth about the world of sharks.

REGISTER HERE
Registration required. The Zoom link will be forwarded to you before the event.

Travel with William McKeever to:

Meet with top marine scientists to discuss the latest scientific discoveries and learn about shark finning.

Interview fisherman and hear the stories of human trafficking of men who work as slaves aboard Asian fishing vessels in the Pacific Ocean and eke out an existence selling shark fins.

Accompany William aboard a Greenpeace ship, the iconic “Rainbow Warrior” patrolling the Pacific to protect the ocean. Hear about their “bear witness” campaign of a fishing industry out of control.

Dive with Williamto the ocean’s depths as he meets sharks up close and personal in exciting underwater footage.

Learn why long-line fishing is dangerous & shark tournaments are cruel. Learn about the mysterious behavior of sharks – their social life, their supernatural migratory patterns and even their sex life. Learn about the effects of climate change on the marine ecosystem. And, learn why sharks are the most misunderstood and most important guardians of our marine ecosystem and why without them the effect, reaching from the frigid waters of the Arctic Circle to the tropical coral reefs of the Pacific, will be catastrophic for generations to come.

William is the founder of SAFEGUARD THE SEAS, a 501 (c) (3) organization dedicated to ocean conservancy and raising awareness of the importance of sharks to the marine ecosystem and the threats they face around the world through education, activism and advocacy. His first book, Emperors of the Deep: Sharks – The Ocean’s Most Mysterious, Most Misunderstood, and Most Important Guardians was published by Harper One in 2019. A feature length documentary (same title as the book), written and directed by William and companion to the book, will be released this year. The film won the “Pegasus Foundation’s Wings Award” at the Princeton Environmental Film Festival.

A graduate of the Wharton School, University of Pennsylvania, with an MBA in Finance, William is a former Managing Director at Merrill Lynch where he managed healthcare investments for a $3 billion hedge fund, former Managing Director at UBS where he was an equity research analyst and ranked #1 healthcare analyst by the Wall Street Journal and former equity research analyst at Paine Webber where he was ranked as an “All American Healthcare Analyst” by Institutional Investor magazine. He has appeared on NBC, CNBC, Bloomberg, Wall Street Journal and more.