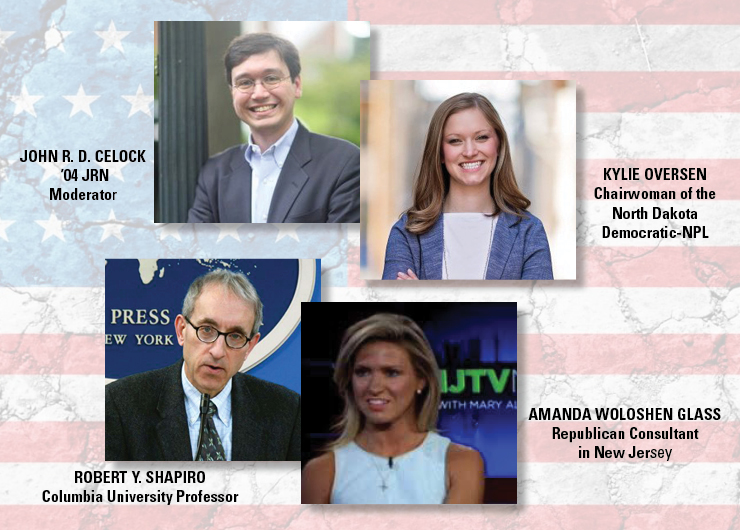 Join us for a thought-provoking discussion with esteemed Columbia University Professor Robert Shapiro as well as Kylie Oversen, the Chairwoman of the North Dakota Democratic-NPL and Amanda Woloshen Glass, a Republican Consultant in New Jersey on the changing ways that candidates connect with voters and their impacts on the last several elections. The last two decades have seen a shift in American voter trends, with suburban communities becoming the key decision makers and swing areas. Nonetheless, urban and rural communities remain key areas for each party. Voters have also become more engaged. At the same time social media, digital advertising and the 24-hour news cycle has transformed how candidates campaign.

REGISTER HERE
This event is only open to members in good standing. Please contact Barbara Rodriguez if you have not renewed your membership.

Robert Y. Shapiro (Ph.D., Chicago, 1982) is a professor and former chair of the Department of Political Science at Columbia University, and he served as acting director of Columbia’s Institute for Social and Economic Research and Policy (ISERP) during 2008-2009. He is a Fellow of the American Association for the Advancement of Science. He received a Distinguished Columbia Faculty Award in 2012 and in 2010 the Outstanding Achievement Award of the New York Chapter of the American Association for Public Opinion Research (NYAAPOR). He specializes in American politics with research and teaching interests in public opinion, policymaking, political leadership, the mass media, and applications of statistical methods. He has taught at Columbia since 1982 after receiving his degree and serving as a study director at the National Opinion Research Center (University of Chicago).

Professor Shapiro is co-author of The Rational Public: Fifty Years of Trends in Americans’ Policy Preferences (with Benjamin Page, University of Chicago Press, 1992) and Politicians Don’t Pander: Political Manipulation and the Loss of Democratic Responsiveness (with Lawrence Jacobs, University of Chicago Press, 2000). His most recent books are The Oxford Handbook of American Public Opinion and the Media (edited with Lawrence R. Jacobs, Oxford University Press, 2011) and Selling Fear: Counterterrorism, the Media, and Public Opinion (with Brigittte L. Nacos and Yaeli Bloch-Elkon, University of Chicago Press, 2011). He is also coauthor or coeditor of several other books and has published numerous articles in major academic journals. He served for many years as editor of Public Opinion Quarterly’s “The Polls–Trends” section, and is currently chair of the journal’s Advisory Committee. He also serves on the editorial boards of Political Science Quarterly, Presidential Studies Quarterly, Public Opinion Quarterly, and Critical Review, and is the Chairman of the Board of Directors of the Roper Center for Public Opinion Research. He has been President of NYAAPOR and Councilor-at-Large in national AAPOR. His current research examines partisan polarization and ideological politics in the United States, as well as other topics concerned with public opinion and policymaking.

This panel will be moderated by CUCNY Governor John R.D. Celock, JRN ’04. An award-winning journalist, Mr. Celock has covered politics from town hall to the U.S. Capitol. He is currently president of Celock Media Group and editor of The Celock Report. A former state politics reporter for Huffington Post, he is the author of The Next Generation: Young Elected Officials and their Impact on American Politics (Continuum International Publishing 2010).