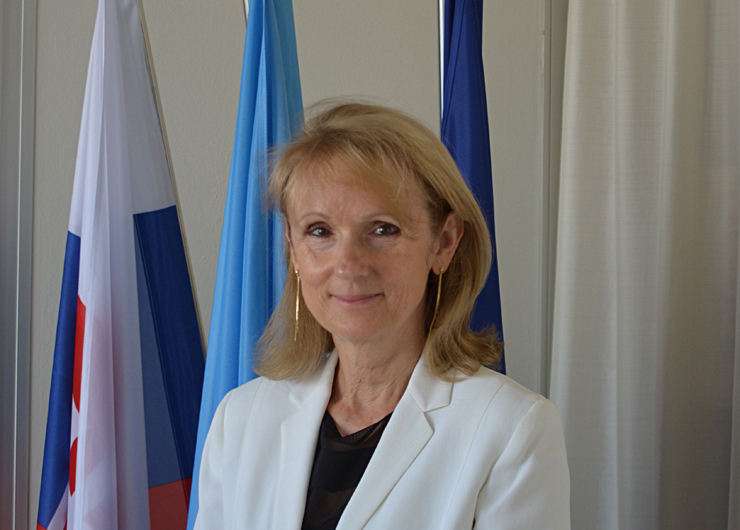 Out of an abundance of caution, we are working to reschedule this event.

Our guest speaker will be Ambassador H.E. Ambassador Klára Novotna, Permanent Delegate of Slovakia to UNESCO.

Cost: Free for members, $15 for guests

The United Nations Educational, Scientific and Cultural Organization (UNESCO) is a specialized agency of the United Nations based in Paris and a unique peace project of the post Second World War period, engaged in sustainable peace endeavors. UNESCO’s founding vision was born in response to a world war that was marked by racist and anti-Semitic violence. More than seventy years later, UNESCO’s mandate is as relevant as ever. Cultural diversity is under attack and new forms of intolerance, rejection of scientific facts and threats to freedom of expression challenge peace and human rights. This program will discuss the history and activities of UNESCO and its humanist missions of education, science and culture reaffirming its multilateral system aimed at the sustainability of the economic and social progress worldwide.

Her Excellency Ambassador Klára Novotná was appointed Permanent Delegate of Slovakia to UNESCO (United Nations Education, Scientific and Cultural Organization) in 2014, until recently. Serving in the Slovak Ministry of Foreign and European Affairs from 1994 to the present, she has served more than 29 years in prominent positions, with an outstanding record in a range of international activities related to the EU and UN.

Ambassador Novotná significantly contributed to strengthening relations between the European Union and UNESCO, especially in scientific sectors and education, as well as in the World Heritage agenda. She acted as chair of various committees and working groups, promoting global cooperation and international dialogue, and actively developed opportunities for young people to become a driving force in the peacemaking endeavors.
As director of the Department for Middle East and Africa (2005–2010), she supervised the political and economic relations of Slovakia with the countries of Africa and the Middle East, in the capacity of national coordinator of the Euro-Mediterranean Dialogue. She also managed the Middle East Peace Process Policy of Slovakia within the coordination process of the EU Common Foreign and Security Policy vis-à-vis the countries of the Middle East and Africa.

Additionally, she served as a member of the operational EU Coordination Commission on EU Common Foreign and Security Policy.
As acting Permanent Representative of the Slovak Republic to the UN (2000–2005), Ambassador Novotná led the Permanent Mission of Slovakia and the Slovak Delegation in the UN General Assembly. She addressed the UN Security Council on crucial international matters and in High Level Meetings of the General Assembly, including negotiations on the endorsement of Slovakia as a non-permanent member of the Security Council (2006-07). She also dealt with relations between the UN and other international organizations such as the OSCE and the OIC.
Serving as Chief of the Cabinet of the Vice Minister of Foreign Affairs (1998–2000), Amb. Novotná managed the preparation of the OECD accession process of Slovakia, and coordinated the relevant governmental bodies in foreign policy matters, preparing Slovak diplomatic policy for obtaining full-fledged EU membership, all while supervising the agenda of the Vice Minister.

From 1994 to 1998, as the first Ambassador (Extraordinary and Plenipotentiary) of Slovakia to Sweden, she established bilateral relations between the two countries at the level of Parliament, Government, civil society, businesses, educational and cultural institutions, while following the EU integration of Sweden with regard to the future EU membership of Slovakia.

As chargé d’affaires of the Slovak Republic in Germany (1993-94), Ambassador Novotná established the first Slovak Embassy in Germany after the division of Czechoslovakia,
maintaining parliamentary, governmental and other bilateral relations at federal and national levels.

As the founding Member of the Slovak Ministry of International Relations (1991-92), she covered the transatlantic and bilateral agenda with countries of the European Community, and participated as an active member of the Working Committee for the division of the Federal Agenda for Foreign Relations.

Ambassador Novotná’s other professional engagements also include serving on the operational EU Coordination Commission on the EU Foreign and Security Policy within the Ministry for Foreign Affairs of Slovakia; serving as National Coordinator of the Barcelona Process (EUROMED); as National Coordinator of the EU–GCC framework; and as Foreign Policy Advisor to the Government of the Slovak Republic on the Middle East.

She received a fellowship from the Department of History, Ludwig-Maximilian University, Munich in 1991, and prior to that a postgraduate doctoral degree in Philosophy, Comenius University, Bratislava in 1984.
Ambassador Novotná is fluent in several languages, including English, French, German, Russian, Hungarian and Swedish.